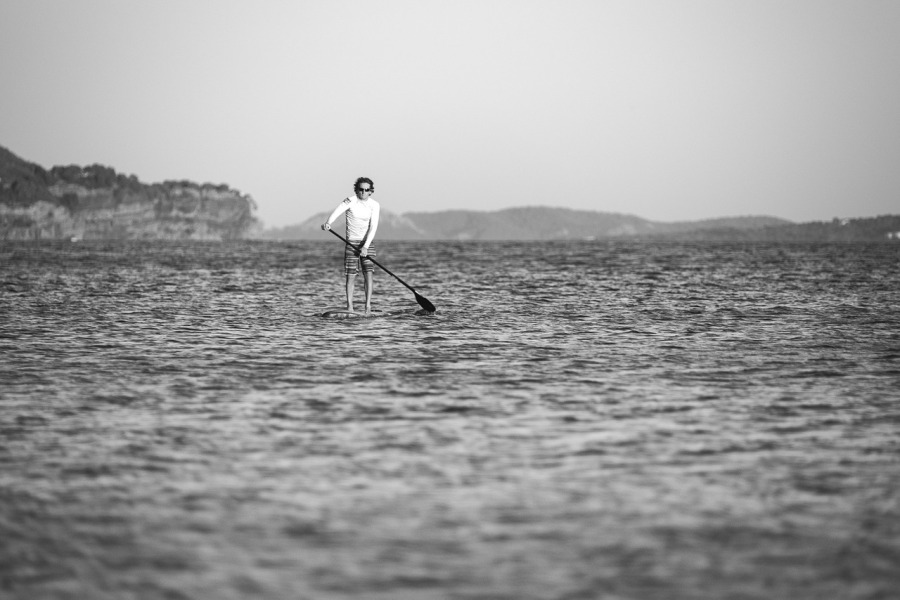 Imagine a sunny day on a stretch of river. That river is liberally peppered with colorful canoes and kayaks, each watercraft full of young people who are out for a day of water sports, but have no freaking clue what they’re doing. On Labor Day weekend, the stars aligned, and I was one of many on that stretch of river, with a friend for our first SUP experience.

But for real, what’s “SUP?” SUP stands for Stand-Up Paddle boarding. I had been wanting to try this since last summer when I discovered that people to yoga on these paddle boards (appropriately called “SUP-YO”).

SUP is supposed to be a great for the following:

Having finally experienced SUP, I can honestly say that I would never survive a yoga class on a paddle board without falling into the water every few seconds. Just standing on them is hard enough… but it was amazing!

Our adventure took place at Nahanton Park in Newton, MA. We rented life jackets, paddles, and boards from Charles River Canoe and Kayak – all we had to do was sign a waiver and show ID. We were given gear and told that the first hour was $18, and we’d be charged in increments of time beyond that and could pay when we returned. Easy enough!

Once geared up, we hiked down to the dock where some very friendly young guys (young dudes? Young men seems like something a creepy old lady would say, and young boys seems even worse!) had us wrap a strap around our ankles to tether us to our respective boards, held the boards steady for us while we kneeled in place on the boards, and told us to have a great time.

That’s it? No instruction on how to handle this thing?? WHERE AM I GOING? Oh, to the left? Oookay…

So we paddled off the same direction as all of the other people, and decided to stand up after getting the hang of steering our boards. HOLY CANNOLI, my legs were so shaky. While my friend rocked it like a champ and stayed on her feet, I got back down to my knees. When my knees started feeling raw and I lost feeling in my toes, I sat on my butt and paddled around like I was on a kayak. It was quite enjoyable! My friend got down and joined me for a quick selfie, and then she was back on her feet when we drifted into a shallow area where those creepy water bugs hopped on for a ride and skittered around on our boards. GROSS. 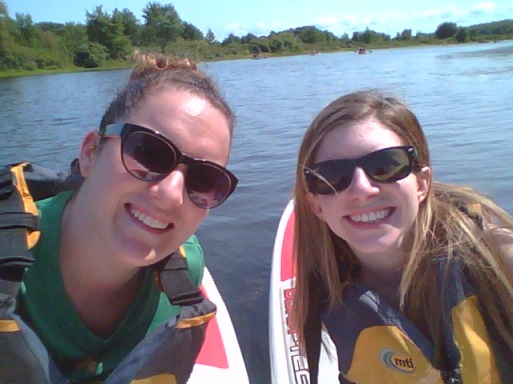 Strangely enough, there were very few other SUPpers. There were tons of canoes and kayaks, though! It was like Mad Max out there… or at the very least, it was like bumper boats. These people had no idea how to steer. It was comical! My favorite was a canoe with four college-aged girls in it. The only girl paddling was sitting up front, and yelled to the girl in back that she needed to steer. I felt for that hard-working girl up front. She is my spirit animal.

Eventually, I did stand back up, and after avoiding wild canoes and wayward kayaks, we turned around and headed back to explore the other end of the river. It was quieter there – less chop, and only a family of four perched on two double-kayaks. We passed them and kept paddling for a few minutes until my friend announced that she was hungry and dehydrated. I snapped a quick selfie (because really, if it doesn’t get posted on Instagram, it obviously never happened), and we paddled back to the dock. 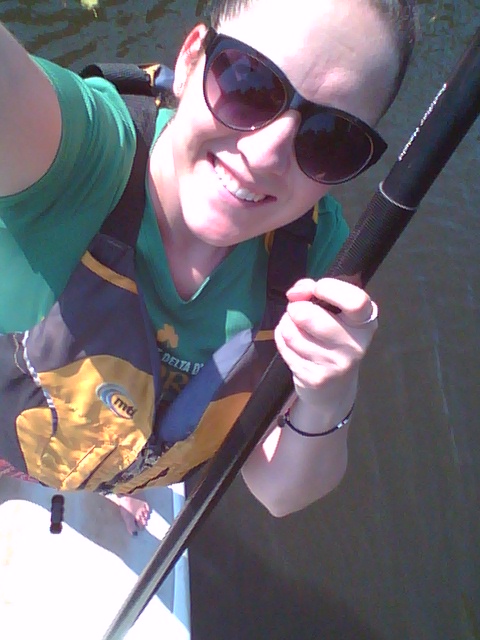 Five stars to Charles River Canoe and Kayak – getting signed in, getting gear, and getting on the water was quick and painless. Getting paid up at the end was also quick and painless. My experience out on the water was amazing – it was athletic, kind of scary, fun, and even became peaceful once I figured out what I was doing. I feel it in my arms, shoulders, core, and legs… a fabulous cross-training activity (although today was supposed to be a rest day… oh well). I think I’m in love with SUP!

Have you ever tried SUP? Where did you try it – a river, lake, or the ocean? What’s your favorite thing about it?