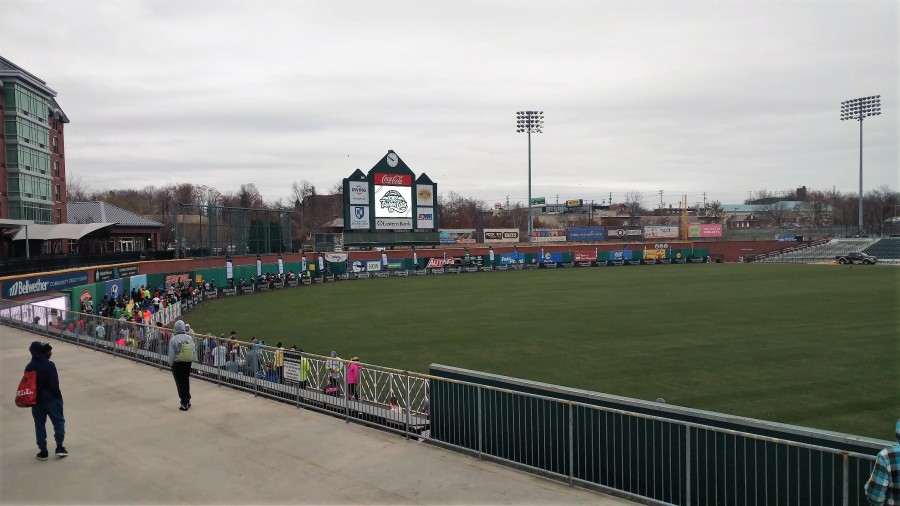 So, for weeks, I have been referring to this race as “the Turkey Trot.” I’m not sure why, but there you have it. People understood what I was talking about, so I guess it’s not that big of a deal.

Every year on Thanksgiving morning for the last five-or-so years, I have run the Feaster Five 5K. I’m obsessed with the Feaster Five. However this year, out of necessity (because hitting Ultra status in the Millennium Running Series constitutes “necessity”), I ended up running a local event: the non-Turkey Trot, actually-Fisher Cats Thanksgiving 5K.

Knowing Millennium Running, these events are ALWAYS well-executed, and this one would be no exception. Plus, it’s part of the Hat Trick Series AND the Millennium Running Series, so I’m working toward a fleece zip with thumb holes AND my finisher’s jacket. WINNING. The course was a simple loop out and back, and was mostly flat… thank goodness, because I ran 2mi on Tuesday and 3mi on Wednesday, and my legs were kind of tired for this race.

I met up for a group photo with the larger crowd from my running group… I love making it to those pictures! There’s always so much energy coming from those ladies. 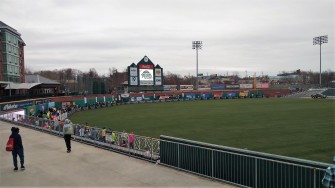 A big draw about this event was that it started and finished on the “warning track” (is this a baseball thing?) inside of Northeast Delta Dental Stadium, the home of the Fisher Cats. Pace corrals were signed so that runners would walk down through the bleachers to access their corral… kind of neat! There wasn’t quite enough room for everyone to get on the warning track, so people were lined up in the bleachers until the crowd thinned out a bit, but it was a neat concept.

Perhaps my favorite part was when Millennium Running brought a local runner up on stage who had been involved in an incident with a car a few weeks ago – he and a friend were out for their morning run when a local kid (16 years old… KID) hit them due to decreased visibility through his windshield because of frost. One of the runners passed away (awful), but the survivor showed up to give a friendly wave to the local running community. It was very emotional. Then we heard that his pal who passed away had been registered to run the Turkey Trot, but that his family showed up to run in his name. 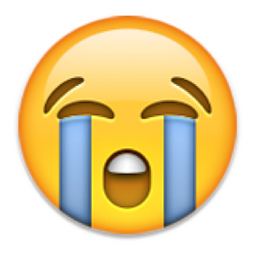 Cue: TEARS. Gawd. Everything makes me cry. Women from my local MRTT group (which has since changed its name to She RUNS This Town, NH, so acronyms from here-on will be SRTT) raised $800 to split between the two families affected. So sad.

A quick PSA for runner safety: wear lights, wear neon, wear reflective gear, don’t wear earbuds, and run against traffic so you can see who/what is coming at you!

So THAT happened. Eventually the gun went off and off we went!

In all reality, it took something like four minutes for us to cross the start line. And it was DANG COLD. But we crossed and took off.

Since the course was mostly flat, there’s not much to talk about here. It was through the millyard in Manchester, which I love. I get the chills thinking about the history that went down in those old mill buildings. Now, they’re businesses and colleges and creating new history.

This was the first 5K in a while where I’ve noticed a few more spectators than normal. I think families must’ve come out to support the crazy runner in their family before turkey time. And there were a ton of volunteers and police officers out making sure the roads were safe for us – always thank your volunteers! Including the frozen children at the water stop.

A short time later, we were sprinting the last .1 toward the finish line. Woohoo! I felt really good about my time, because I used my Fitbit Blaze to track my run and was thrilled to see my splits.

Still, not a goal of mine… I’m not worried about speed at all. But it’s encouraging to see that my speed has steadily improved over the last six months.

So that’s it… I chatted with some runner friends I bumped into after the race, grabbed a Powerade and a banana, and headed home.

But before I forget… I made this skirt for my run:

The little girls at the race thought I was the coolest because I had sparkled on my skirt… and I agree with them. The sparkles definitely made me cool. They gave me super speedy powers, I think. I paired my homemade skirt with last year’s Feaster Five shirt (I just can’t let it go – I love the Feaster Five!), a Hipper Runner headband, and Crazy Compression calf sleeves to make my tired legs a little happier.

All in all, it was a nice race and a great experience. If for some reason next year I’m unable to do the Feaster Five, I’d do this one again! Plus, it was so nice to have so many runner friends there! Prior to this summer, I did all of my running alone. Having friends makes it so much easier and much more fun. Plus, the built-in support system just does great things for my juju.

Did you get out there and log some miles before Thanksgiving? Where did you run, and why?